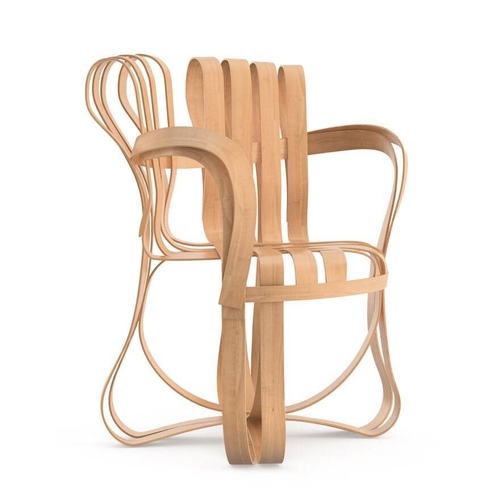 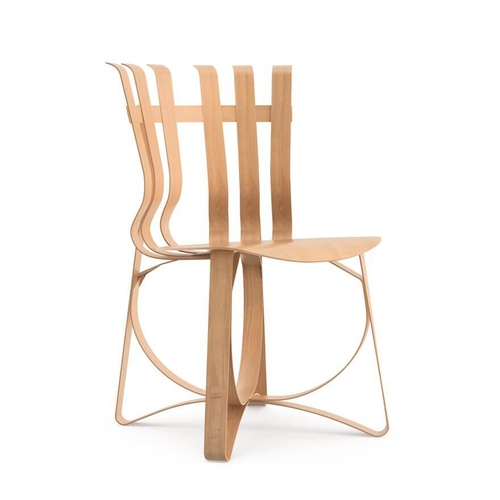 Frank Gehry is an architect and designer, but his genius and reach have rendered him much more than that. Undoubtedly, he is one of the most innovative and prolific designers of his generation. His designs are just as unconventional as he is, and just as violently exuberant. His striking and unique forms straddle the border between reality and fantasy. And while his architectural reputation precedes him, lesser known are his furniture designs. But furniture was his big break, one he put a halt to before it had a chance to take on a life of its own. It’s a big question of what could have been had he pursued a career in design over architecture. Perhaps a world without the Guggenheim in Bilbao, the Walt Disney Concert Hall or the Louis Vuitton Foundation. Perhaps an entire world of these audacious and spectacular forms scaled to fit inside a living room. Despite being secondary to his architectural career, his furniture remains highly sought after and an inspiration for many other designs.

Frank Gehry was born Frank Owen Goldberg in 1929. He was raised in a working-class family in Toronto. Showing creative promise as a child, Frank was encouraged by his grandmother, with whom he built miniature cities from wood scraps. His mother also instilled a hunger for culture in the household, playing the violin for her family and taking them to the philharmonic. Gehry recalls his early years with affection, crediting their role in forging his creative path.

When he was 17, his father suffered a heart attack, and the family fell on hard times. They moved to LA, where Frank found work as a truck driver to help make ends meet. Art became his escape from a harsh reality. Frenk Gehry began taking classes at Los Angeles City College and enrolled in a local ceramics course. Not long after, he enrolled in USC’s School of Architecture. He recalled the factors that had a part in his decision. “What made me excited? And I remembered art, that I loved going to museums and I loved looking at paintings, loved listening to music. Those things came from my mother, who took me to concerts and museums. I remembered Grandma and the blocks, and just on a hunch, I tried some architecture classes.”

After graduating in 1954, Gehry spent the better part of the following decade meandering through different fields and environments. He served a stint in the US army, followed by a brief period of study at the Harvard Graduate School of Design and a year living in Paris, before setting up his own studio in 1962. Gehry describes a period of the sixties spent engrossed in the convivial art scene of the warehouses and lofts of Santa Monica. He counted Edward Kienholz, Robert Irwin and Ed Ruscha among his friends. But at the same time, he was trying to build his career in architecture, which wouldn’t take off for decades yet.

The 1972 was the year Gehry’s career gained traction – not for his architecture, but his furniture instead. The Easy Edges line included chairs, stools and tables made of corrugated cardboard. The forms were sculptural and playfully loopy – among the standouts were the Body Contour Rocker and the Wiggle Side Chair. “I started experimenting with cardboard in all the ways one would think of it in terms of efficiency; folded sheets make a structure very economically. Somehow, when you made something, it wasn’t very nice. It was folded cardboard. Then one day I was looking at architectural contour models, which were layers of cardboard. I was looking that the end elevation with its combed look, and I got excited about it.”

The collection received a whirlwind of attention upon its launch, being aesthetically appealing, durable and economically accessible. One publicity shot even showed that three of the chairs could hold the weight of a car. The collection sparked interest in Frank Gehry as a designer, which didn’t have the intended effect. He decided he wanted to be known as an architect, not a furniture designer, and pulled the plug on the line. Gehry’s architectural career did rise to prominence in the eighties, and he became one of the leading architects of his generation. Intermittently throughout the decades, however, he still worked on furniture designs.

His interest in cardboard experiments was ongoing, and led to the launch of the Experimental Edges collection in 1982. Easy Edges had been overpoweringly commercial, its sleek forms easy to market and sell. With Experimental Edges, Gehry hoped, “I was trying to do something that wasn’t marketable.” The line was characterized by fluted cardboard sheets, purposely mis-stacked and frilled at the edges. In comparison to the solidity and slickness of Easy, Experimental was untamed and bouncy. This time, it was furniture for the galleries, not the department store.

Frank Gehry also created a bentwood furniture collection for Knoll in 1992. He sought to lighten the thick main structures typical of bentwood furniture, using the apple crates of his childhood as inspiration. The end result was a structurally lightweight, ribbon-like design.

Prior to designing his own residence, Gehry was working mostly on generic developments. The Gehry House, designed in 1978, was the turning point of his career. It was the project that established him as an avant-garde architect with a distinct architectural language. In creating for himself, Gehry was able to set his ideas free and experiment to a great degree. He used ordinary but unusual industrial materials such as corrugated aluminum, plywood and chain-link fencing to redefine the exterior of an existing pink bungalow, adding space and personal expression.

Tucked behind the transparent new structure, the old house was still visible. From the street, passers-by are met with a wall of corrugated metal, intersected at the corner with a glazed surface, hinting at the composition of the yard-facing façade with glazed cubic formations protruding at angles from the existing house. It made for a makeshift, collaged look that stood out against the pristine middle-class milieu, much to the chagrin of his neighbors. He’s been called the “the apostle of chain-link fencing and corrugated metal siding”, and the crude style of the house set the tone for much of his work to follow.

The Gehry House marked the beginning of the spectacular architectural career that was (and still is) Gehry’s. In 1989, he won the prestigious Pritzker Prize after completing several notable public projects. The same year, he completed the Vitra Design Museum, which could be considered a deconstructivist icon, though Gehry himself rejects this label of his work. However, the assemblage of cubic and irregular forms wasn’t arbitrarily placed, but according to functional and lighting needs. He builds from the inside out, but the expressive and sculptural exteriors of his buildings are what’s instantly recognizable – you know a Frank Gehry when you see one. But none is more representative of the Gehry hallmark than the Bilbao Guggenheim.

Frank Gehry is undoubtedly best known for the Guggenheim Museum in Bilbao. The construction of the museum went by relatively unnoticed, but its opening caused an explosion of media attention. The great architect Philip Johnson – 91 at the time – traveled to Spain just to see its completion and went on to call it “the greatest building of our time.” His inspiration for the museum came from fish – the curves of its shiny and scaly exterior are unmistakable. But the colossal collage of stone, glass and titanium is most important for being a transformational work, marking a shift in global culture. The Bilbao effect was the term coined to explain the phenomenon in which the construction of a remarkably innovative building was responsible for the economical revival of a declining city. It became a model for projects all over the world, hoping to achieve the same goal. It also gave rise to spectacle and showmanship in the architectural profession.

He is a true innovator, whose originality stems from his artistic genius and renegade status. His designs are audacious, sculptural and highly complex. When his ideas – of fish, and others – surpassed the limits of what was possible to produce by hand, he harnessed technology to aid his expression. The shapes born from that early architectural language of the Gehry House became increasingly curvilinear and gestural, thanks to the programs his company developed. He was never bound to the architectural conventions of his contemporaries, for he always associated more with artists, and found inspiration in their art. In a way, Frank Gehry is closer to an artist in his way of thinking and developing ideas than he is to the often hands-off architectural approach. Arguably, he is the most influential architect of the late 20th century.