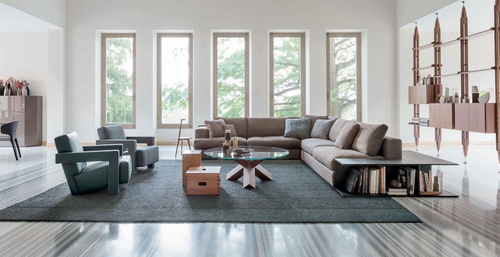 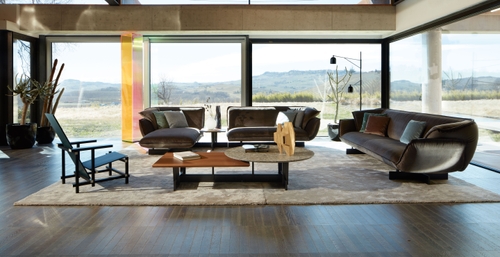 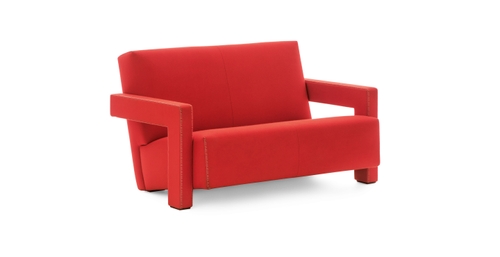 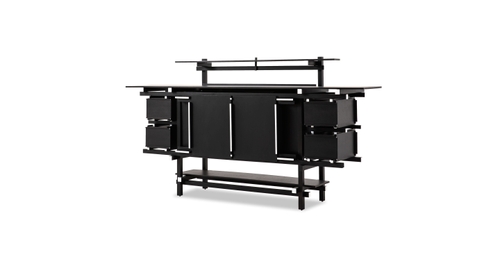 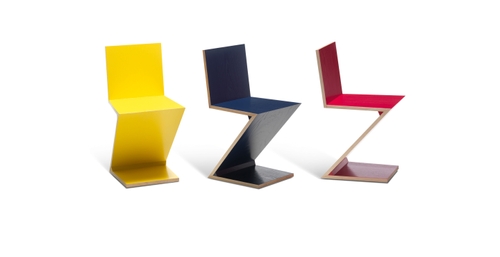 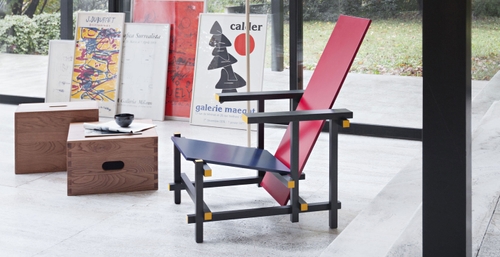 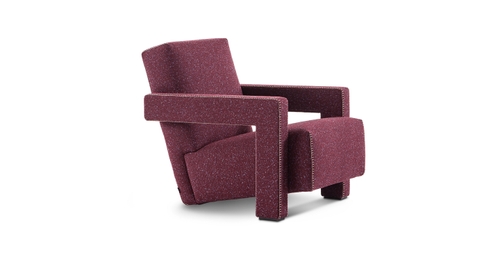 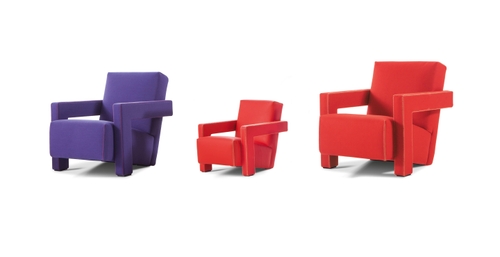 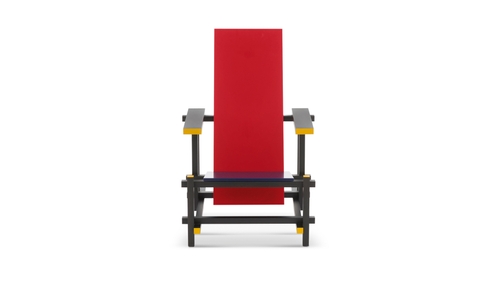 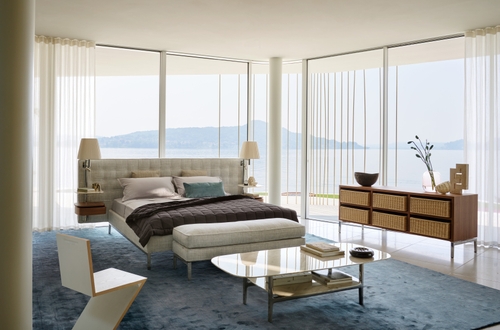 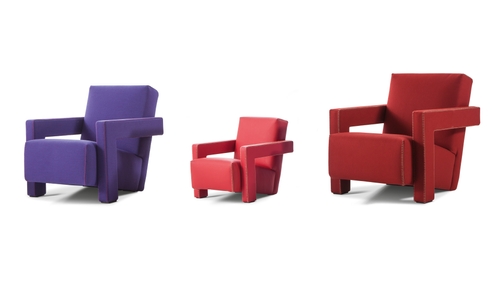 Gerrit Rietveld was the Dutch designer and architect whose work was the paragon of the key avant-garde movement of the inter-war period of the 20th century. He is widely considered one of the greatest of his time. His association with the De Stijl movement offset his career, and his opus defined the course of architecture and design history.

Born in the city of Utrecht in 1888, a young Gerrit Rietveld began his career as an apprentice in his father’s carpentry workshop. During his formative years, he worked as a draughtsman and furniture maker, while studying to become an architect. As an avid furniture designer, he experimented with form, favoring simplicity and abstraction. In 1917, he created his first important piece – Red and Blue Chair. The design would go on to become an icon of the twentieth century design. However, the chair wasn’t red and blue to begin with. Constructed in wood, it was a representation of his early approach to design, foreshadowing the direction he would embrace in the next decades of his career. Simplistic and orthogonal in design, it anticipated the principles of a movement for which Gerrit Rietveld was a central figure.

The first postulate of the first manifesto of De Stijl, an avant-garde movement founded in 1918, which brought forth a dialogue on the new consciousness of the post-war age. Also known as Neoplasticism, the Dutch art movement’s philosophy propagated a replacement of the “individual” , represented by natural forms and colors, with a new, universal, plastic art. This art promoted a pure and universal abstraction, a geometric art devoid of representation, comprised solely of rectilinear, asymmetrical compositions using primary colors offset against a black, white and grey base.

Gerrit Rietveld showed a great interest in the new style, joining the group the same year. Influenced by neoplastic principles, he changed the color scheme of his chair to the black frame with red, blue and yellow accents for which it is known today. He dedicated the next two decades of his career to experimenting within the scope of De Stijl, bringing its principles into the world of architecture.

Gerrit Rietveld became the third, key member of the De Stijl movement, aside from its founders Piet Mondrian and Theo Van Doesburg, the driving force of the group. Before the work of Rietveld, there was very little to be said about the architecture of Neoplasticism. There were some attempts at materializing the movement in three dimensions, but no examples which fully embodied the movement’s rigid principles of abstraction.

The first three-dimensional object associated with De Stijl was Rietveld’s Red and Blue chair – the piece which laid the foundation for other elements of furniture he designed in the upcoming years. Chairs, tables, a child’s wheelbarrow – all created with a similar concept in mind. However, it was in 1920 that he achieved a synthesis with his interior of a medical office in Maarssen. Designing every piece of the room in the elementary linear aesthetic of De Stijl, it brought his work within the movement to a new scale.

The pinnacle of Gerrit Rietveld’s architectural contribution to the movement was undoubtedly the Rietveld-Schröder house that he designed in 1924. It’s considered to be the only true architecture of De Stijl. It followed to a great degree the postulates Van Doesburg set in his article “Towards a Plastic Architecture”. It was economical, functional, anti-monumental and “in contrast with all previous styles”.

Designed for a wealthy widow and her three children, it was very much a joint collaboration between the architect and his client who was an avid patron of the arts. Together, Rietveld and Mrs. Schröder designed a house independent of its surroundings, which blurred the boundaries between inside and out. The overlapping and intersecting of white and grey planes, highlighted with linear elements in red, blue and yellow make the house seem almost like a Mondrian painting in three dimensions. The dynamic floor plan was a result of the client’s wishes for a house without walls. Sliding wall panels enabled the opening and closing of spaces according to need, thus creating a transformative environment.

Aside from the architectural design of the house, Gerrit Rietveld also created the majority of the interior furnishings. The house truly embodied the avant-garde notions of the De Stijl movement, with little regard for bourgeois decorum and superficial expressions of wealth. Ultimately, the successful collaboration of two like-minded modern individuals turned into a long-standing professional and private partnership between Rietveld and Mrs. Schröder.

Towards a Functional Architecture

At the same time, the De Stijl movement underwent major changes. It was accelerated by the increasing friction between Mondrian and van Doesburg, which lead to Mondrian’s separation from the group. He continued to work under the principles he had formed within the De Stijl movement as an independent artist. He was unable to reconcile with van Doesburg’s incorporation of diagonal lines into his art. After 1925, Gerrit Rietveld also distanced himself from van Doesburg, eventually breaking with De Stijl in 1928 and joining the New Objectivity movement. At the same time, he became one of the founders of CIAM, a highly influential organization which sought to disseminate the principles of modern architecture, dealing with topics of functionality and standardization within architecture and urban planning.

Becoming increasingly preoccupied with the functional aspect of his work, these associations certainly influenced Rietveld’s new focus aimed towards prefabrication, mass production and social housing.  His altered style is evident in the houses he designed for the Werkbund exhibition in Vienna in 1932, with an emphasis on making the most of limited space. Gerrit opted for a Loosian approach, with varying floor levels and heights. Although the exhibition itself was unsuccessful, especially with the escalating political situation of the time, it provided an opportunity for Rietveld to formalize his changing architectural tendencies during a difficult period of stagnation in construction.

The New Direction for Gerrit Rietveld

In the 1930s and ’40s, Rietveld’s furniture had completely moved on from his initial designs. His approach became focused more on technical construction and functionality rather than abstraction. During this period, he designed the Zig-Zag Chair, a jointless chair made from one single piece of wood. He experimented with the production process, creating multiple variations of the finished piece. His later furniture designs differ even more from his beginnings, incorporating a more comfortable look and feel, even utilizing curved angles in his upholstered New Amsterdam Armchair.

Towards the end of his career, he focused more on architectural endeavors, designing the Dutch pavilion for the prestigious Venice Biennale. In 1963 he received an even more prestigious commission – the design for the Van Gogh Museum in Amsterdam. It was Rietveld’s final project, as he died only a year later. The museum opened a decade later, completed by his partners, van Dillen and van Tricht. Functional and orthogonal in design, it exemplifies his later architectural approach. It has little in common with the Rietveld-Schröder house he built four decades before.

Today, Rietveld’s name stands as one of the greatest of twentieth-century Dutch architecture and design. During his prolific career, he received international recognition for his contribution to architecture and avant-garde movements. This was elevated with the retrospective exhibition of De Stijl at MoMA in 1952 and a retrospective of his architectural work in Utrecht six years later. Despite steering away from De Stijl in the middle of his career, his early works associated with this movement are acknowledged worldwide for their innovative character at the dawn of the modern movement. Gerrit Rietveld can be considered the one, true architect of De Stijl. Of the movement whose principles greatly influenced the development and impact of abstraction on the global art course at the beginning of the twentieth century.